…..and the more detailed review:

The photography event was conducted over a brilliant Saturday with two organisers from Champagne SG and two professional photographers. Despite the earlier drizzle, the weather had thankfully cleared up by the start of the event. There was good turn up of around 22 participants and close to equal mix between males and females.

We began a round of introduction faciltated by the organisers, followed by a "form up the puzzle" ice-breaker which determined one of the two teams that we would later stick with for the rest of the event. The professional photographers then introduced key concepts behind street photography (e.g., the importance of having a theme and the discipline to frame your photos by self-imposing a limit on the total number of shots). They were friendly as well as approachable, and did not discriminate between those carrying higher end D-SLRs and those carrying entry-level compact cameras, even to the extent of sharing of that an iPhone 4 would make for a rather good digital sketchbook for conceptually framing photos.

After each of the teams outlined 10 or so themes which they hoped to capture, we then set out on alternating routes around Ann Siang Hill with each team accompanied by a professional photographer and an organiser as guides. This leisurely walk-and-snap routine allowed for individuals to mingle with one another at a pace of our comfort, sharing everything from pointers on choosing a good camera to great food in the area to our next travel location. We spent a good hour or so on the actual photography, snapping a myriad of items from signposts to reflections to human expressions.

The event was subsequently wrapped up over a coffee/tea and dessert session, in which each individual got a opportunity to receive personalised feedback from the two professional photographers on a selection of photos from his or her repertoire.The only downer was that the individuals were a little too spread out and comfortable in their seats at this point for individuals to get to know their counterparts from the other team without organiser facilitation.

I had to scoot off shortly after for an early dinner appointment, but would hazard a guess that there were sufficient dynamics going amongst some individuals to have adjourned thereafter for post-activity interactions.

All in all, kudos to our Champagne SG organisers Maggie for candidly sharing her personal expertise with photography, and to Siu Foong for making sure that the littlest of details were sorted out well…right down to making sure everyone got their drink right! 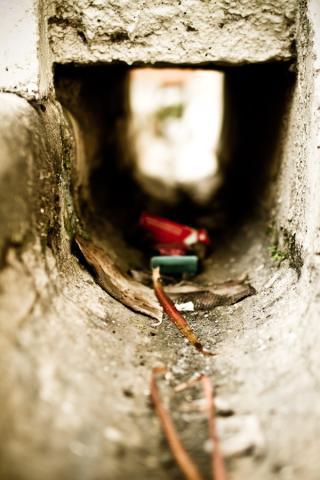 ["Drain" by Gary. Winner for the photography event] Overlooked as just a passageway for storm water to flow, it often unintentionally becomes the home of for unwanted litter