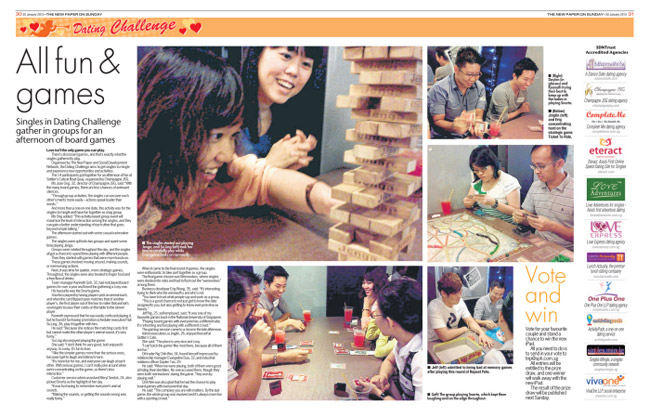 Love isn't the only game you can play.

There's also board games, and that's exactly what the singles gathered to play.

Organised by the The New Paper and Social Development network, the dating challenge aims to get singles to mingle and experience new opportunities and activities.

The 13 participants got together for an afternoon of fun at Settler's Café at the Boar Quay, organized by Champagne SG.

Ms Joan Ong, 32, director of Champagne SG, said:" With the many board games, there are less chances of awkward silences.

And more than a one –on-one date, this activity was for the singles to mingle and have fun together as a big group.

Ms Ong added:" This activity-based group event will maximize the level of interaction among the singles, and they can gain a better understanding of each other that goes beyond simple talking.

The afternoon started out with some casual ice-breaker games.

The singles were split into two groups and spent some time playing Jenga.

Groups were rotated throughout the day, and the singles all got a chance to spend time playing with different people. Then they started with games that were more hands-on. These games involved moving around, making sounds, or memorizing actions. Next, it was time for quieter, more strategic games. Throughout, the singles were also treated to finger food and a free flow of drinks.

Team manager Kenneth Goh, 32, had not played board games for over a year and found the gathering a cosy one.

His favourite was the Snorta game.

Snorta is played by having players pick an animal each, and when the card flipped open matches that of another player's, the first player out of the two to make that animal's sound gets to pass their cards on the table to the slower player.

Kenneth expressed that he was easily confused playing it, but he found it fun having promotion scheduler executive Paik Su Ling, 26, play it together with him.

He said:" Becauseshe notices that matching cards first but cannot make the other player's animal sound,it's is very funny."